The Vow of Having Psychic Power to Know the Past Lives

The fifth vow of the forty-eight vows is about "having psychic power to know the past lives." The vow says, “If, when I attain Buddhahood,humans and devas in my land,should not remember all their previous lives, not knowing even the events which occurred during the previous hundred thousand kotis of nayutas of kalpas, may I not attain perfect Enlightenment.”

The word "nayutas" refers to a counting unit of a very large number in ancient India. It has different interpretations, ranging from 100,000, millions, tens of millions, billions, and so on. According to the Sutra, an arhat has the psychic ability to know their past lives that span 80,000 kalpas, but not beyond that. However, devas and humans in the Land of Ultimate Bliss know what has happened to themselves and others in the past countless billions of kalpas. Therefore, the supranormal power of beings in the Land of Bliss to remember events in past lives is billions of times greater than that of Arahats.

Why did Amitabha Buddha make the vow that all beings in his Pure Land should have the "psychic power to remember their past lives"?

This is because Amitabha Buddha witnessed the absurd and perverse behavior of the majority of sentient beings in the ten directions due to their ignorance of what had happened in their past lives.  For example, the servant you are ordering around now was in fact your mother in your previous life. Your beautiful, loving wife is here to settle a score with you relating to some money or love issues in your former life. Or the chickens, ducks, and fish that you slaughtered and ate were your former relatives. Your departed father, who was a doting grandpa to your son, has now been reborn as the pet dog in your family so he can be with his grandchild. Maybe your son is here to claim back what you owed him in your previous existence.

As we know, the relationship between children and their parents is either one of reciprocal feelings of kindness or vengeance or one of seeking the repayment of a debt or fulfillment of some other obligation from the past. The chain effect of karma (cause and effect of one’s action) that straddles our past, present, and future lives is highly intricate and complex, as one would imagine. Sentient beings who are ignorant of what took place in the past will inevitably do something absurd and perverse. Therefore, Amitabha Buddha placed “remembering past lives” as the first of the six vows of supranormal powers he made. With this power we will have a thorough understanding of sentient beings’ suffering in the six realms of transmigration, and a mind of compassion and wisdom. And with this mind, we will aspire to attain perfect enlightenment and to liberate sentient beings from samsara.

I would like to tell a story now about the absurd and ludicrous things sentient beings do as a result of their not knowing their past. This is a famous story that most of you are familiar with.

One day, Monk Zhi Gong, the Buddhist teacher of Emperor Liang Wu Di, passed by a family that was having a wedding banquet. He used the following gatha to describe what he saw:

It’s so weird, so very weird,
That the groom is marrying his grandma.
Pigs and goats are sitting around the table,
While relatives are being cooked in the pot.
A daughter eats her mother’s flesh,
While a son beats a drum made of his father’s skin.
People came for celebration,
But I say, this is such a tribulation.

“It’s so weird, so very weird, that the groom is marrying his grandma.” :

During her lifetime, grandma was particularly doting on her grandson. She was very worried that her grandson would not be properly cared for when she was gone, and believed that she would be the only one who could look after the boy. Therefore, after her death, she was reincarnated as the young girl in the neighboring village and became her grandson’s bride in this life.

"Pigs and goats are sitting around the table" :

The relatives who attended the wedding banquet were pigs and goats slaughtered in their previous lives. Since their evil karma has been absolved and they have settled what they owed others, they were reincarnated as human beings in this life.

"While relatives are being cooked in the pot" :

The pigs, cows, and goats in the boiling pot were the groom's human relations in their past lives when they ate a lot of pork, beef and lamb. In this life, they were reborn as such animals and got slaughtered to repay the debts they owed to those lives they had consumed as food before.

"A daughter eats her mother’s flesh":

A woman at the next table is eating, with relish, the meat of her mother from her past life.

“While a son beats a drum made of his father’s skin.” :

At the banquet, there’s a musician playing the lute and drum. The drumhead was made of the skin of a donkey which was the father of the musician in his previous life.

Everyone thought it was a happy occasion, but Monk Zhi Gong just sighed and lamented,

“But I say, this is such a tribulation.”

People are actually seeing the unsatisfactory nature of things as blissful! That is absurd and totally opposite to the Buddhist teaching of the truth of reality.

We learn from that story that we mustn’t get trapped by upadana (Sanskrit word meaning attachment, clinging and grasping) regarding family and love. A strong hold of upadana will bind us in the six realms of samsara. Also, to be vegetarian is a safe way to avoid eating your loved ones from countless past lives. For those of you who do not practice Amitabha-recitation  to get reborn in the Land of Ultimate Bliss, you will be reincarnated as a pig, a cow, or a sheep in a future life for having devoured the flesh of other sentient beings.

Let me conclude by looking at the benefits of having the supranormal power of knowing our past lives. First, we will understand that with every action there is a consequence, and believe in the law of karma. We will then avoid ludicrous behavior that is contrary to moral principles and the right views taught by the Buddha. Second, armed with this power, we will be able to tell the  personality, characteristics and preferences of individual sentient beings from all their past lives. This will help us to guide them, in a more expedient way, to attain perfect enlightenment. Third, because we will know about the past of ourselves and others, it is unlikely that we will be contemptuous and arrogant. We will know that, like all other sentient beings, we have been animals, hungry ghosts, and hell dwellers, and are no more superior than others. Nor will we despise and look down on others. This is because we will understand that other people in their past lives, had either been celestial beings, or had enjoyed great wealth and esteem too. And fourth, with this ability we can tell that, despite our having accumulated innumerable bad karma over countless lifetimes, Amitabha Buddha does not forsake us and still delivers us to the Land of Ultimate Bliss to become Buddha. We will forever be free from the suffering of samsara. Amitabha Buddha is so kind to us! We are eternally grateful to him. These are the four advantages of this psychic power. 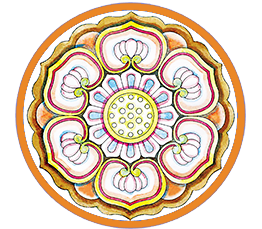