Welcome to the English-language website of the Pure Land school. Our aim is to introduce to international audiences the teachings and practices of Pure Land Buddhism according to the lineage of Master Shandao (善導大師, 613-681) of Tang Dynasty China.

Master Shandao, long revered in East Asia as an incarnation of Amitabha Buddha, is universally acknowledged as the de facto founder of the Pure Land school of Buddhism. Grounding his teachings in the three Pure Land sutras preached by Shakyamuni Buddha, he urged practitioners to aspire to rebirth in the Land of Bliss by reciting the name of Amitabha Buddha exclusively.

Pure Land has long been the largest school of Buddhism in China and eastern Asia. But the versions that have flourished over the past millennium are not the original form taught by Shandao. The reason is historical: Because of a Buddhism-persecution campaign in the late Tang Dynasty, the writings of Shandao and his disciples were lost in China for a thousand years. During that period, the teachings became mixed as masters from other traditions interpreted Pure Land Buddhism according to the doctrines of their own schools.

Shandao’s texts were, however, transmitted to Japan, where they not only survived but thrived. The Shandao lineage became the basis on which the Jodo Shu (Pure Land School) and, later, the Jodo Shinshu (True Pure Land School) were founded. These evolved into a dominant stream of Japanese Buddhism, though with many features different from what Shandao had taught.

It wasn’t until the end of the Qing Dynasty that Master Shandao’s original writings were “re-exported” back to China. However, war, revolution and political upheavals posed formidable obstacles to the systematic study and propagation of pristine Pure Land Buddhism. Only with the relative peace and social development of recent decades have such efforts begun in earnest.

Our English website is in its early stages of construction. Over time, we will be adding content and features. (Readers of Chinese are encouraged to browse our Chinese-language website, www.pureland-buddhism.org, which contains a wealth of material on the Pure Land school.) 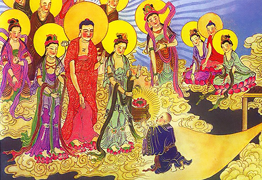